When my son was very young, he was watching television one day and noticed one of the characters was drinking a “cola.”  That’s what it said on the can.  He asked me if that was Coca Cola and we talked about how they often substituted generic products so they didn’t give free publicity to companies.

Over the years, one of our little games became “spot the product placement” in TV and movies.  We especially liked the NBC show “Chuck” where different characters just had to love eating a Subway sandwich each week.

But those were entertainment shows.  Now we’re seeing product placement in the news, called by a new name:  Native Advertising.

It is product placement, wrapped up in a news story, and sold as news.  It may say “Sponsored” but it’s really not clear that it’s been bought and paid for.  It’s gotten so bad the Federal Trade Commission had to put in place new rules to make the designation clearer.

“The more a native ad is similar in format and topic to content on the publisher’s site, the more likely that a disclosure will be necessary to prevent deception,” said the FTC in announcing the rules.   “From the FTC’s perspective, the watchword is transparency.  An advertisement or promotional message shouldn’t suggest or imply to consumers that it’s anything other than an ad.”

If you’re thinking your company does it right, you may want to double check.  A MediaRadar study from April, 2016 shows that 70% of websites aren’t compliant with the FTC rules.  As many as 12% of the native ads had no label whatsoever designating it as paid content.  The study found that most publishers are labeling branded content in some form or fashion, they may not be doing it right, the labels are too subtle, or they’re not in the right place.

I’m not against native ads.  I’ve clicked on many of them and found the information helpful.  We’ve run our fair share.  We’ve opted to label our native ads as “Sponsored Advertising Content,” per the FTC guidelines to make it clear, both on the page where it appears and at the top of the article.  In this case, we also listed the company as the author of the material.

If you’re thinking all of this is much-ado-about-nothing, think again.  Business Insider reports native ad spend in 2016 at $7.9 billion, growing to $21 billion by 2018.  In light of ad blockers and social media now allowing sponsored content, we’ll see more of it.  Consumers, however, aren’t quite yet sold on native ads.  In big part, because they feel “tricked” into reading something without knowing it’s paid placement, which gets us back to the argument about better labeling.

And the numbers are worse for native ads.  A 2014 study by Contently found that two-thirds of readers felt deceived upon learning an article or video was sponsored by a brand. 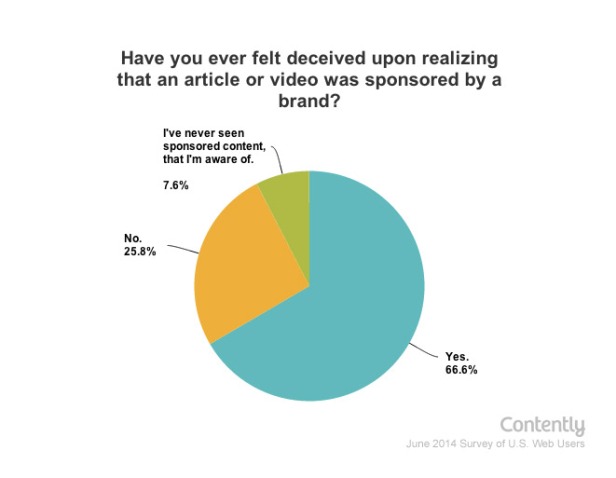 61% of people responding to a 2015 Civic Science said sponsored content hurts the credibility of news outlets in which it appears.

When the majority of people tell me that doing something will negatively impact my brand, I take it seriously and move cautiously.  It’s not that you shouldn’t do native advertising, but if you are going to do it, you’d better do it correctly.

So much of whether branded content works for advertiser, publisher, and consumer has to do with how it’s executed and the quality of the content.

One thought on “When the majority of people tell me that doing something will negatively impact my brand, I take it seriously”