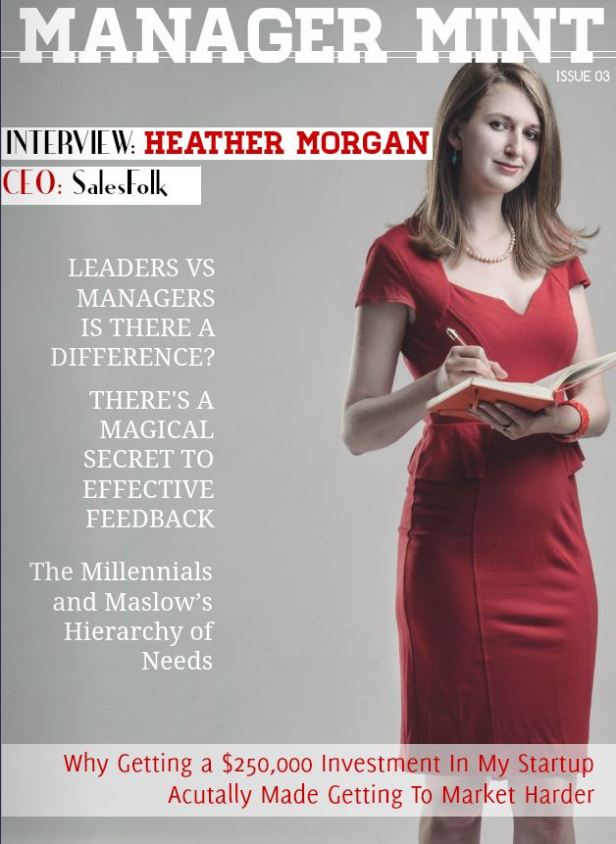 You can read it here.

6 key differences between Leaders and Managers

Managers get their authority by virtue of their position. Leaders command their authority by the way they lead. In sports, for example, the coach has the authority over the team by the simple fact that he or she has been hired for the job and entrusted with the responsibility. Leadership, however, can come from the coach, from the players themselves, or even the fan base.

Leaders develop the overall vision and strategies to fulfill that vision. Managers are charged with the planning, budgeting, and implementation of those strategies.

Here are six key differences between Leaders and Managers.

Leaders set the tone and create the vision.
Managers focus on plans, budget, and timetables for implementation.

Jim Collins tells the story of James Burke at Johnson and Johnson, who once pulled his management team together and threatened to rip the company’s credo off the wall. It laid out the company’s vision, including a higher duty to “mothers and all others that use our products.” “If we’re not going to live by it,” he said. “Let’s tear if off the wall.” He held similar meetings around the world with subsidiaries that ended in a re-commitment and a clear reminder of the company’s vision.

2. Developing a Network for Achieving the Agenda

Leaders create teams that share the vision, makes sure people understand the goal, and communicate with those needed to fulfill the vision.
Managers staff and organize, creating a structure for achieving the goals. They delegate responsibilities, create systems for execution and monitoring activity.

Jack Welch, while at GE, often said that his biggest accomplishment was finding great people.

Leaders motivate, inspire, and get people excited about the project. They help push people past obstacles and paint the picture of what can be accomplished.
Managers solve problems, monitor the results, and control the process.

I was in a meeting recently where we were trying to get several companies to help fund a project that would ultimately give a refurbished car to a needy family. Things weren’t going well until the owner of one of the businesses told his personal story about escaping a gang life, getting some help along the way, and building his own auto repair business. Nearly in tears, he told the group how he got a second chance in life and he wanted to give others the same opportunity he had. His quiet talk inspired others in the room to commit to the project.

Leaders challenge the system, the marketplace, and the people. Leaders produce change.
Managers produce predictability and a sense of order. Managers don’t always seek to produce change, but rather are more comfortable in maintaining the current.

While at Apple, Steve Jobs challenged everything and everyone by producing change at an incredible level. Among others, his vision changed the music industry, the cell phone business, digital publishing, animated movies, and tablet computing.

Leaders are concerned about how effective the outcome is for the firm.
Managers are considered with how efficient the operations are.

Jack Welch was also known for his mantra at GE that any business GE was involved in would be number one or two in its field or would be eliminated. Whether you agreed with him or not, he clearly articulated his vision and the goal and kept focus on the outcomes.

Leaders are about the long-term, innovation and taking risks.
Managers are more about the short-term, avoiding risks, and maintaining operations.

Lee Iacocca is credited with turning Chrysler’s fortunes around with his strong leadership skills. Iacocca said that one of the key attributes of leaders is the ability to make tough decisions without fear. While he trusted his subordinates, he also defined his style of management by consensus.

“Consensus is when we have a discussion. They tell me what they think. Then I decide.” – Lee Iacocca

Leaders must be bold and decisive and unafraid of risks. Conversely, some managers fail to understand the risk of not making a decision.

Leadership takes discipline, commitment, and guts to create a vision, gather the right team, and the ability to motivate, inspire, and create followers. Through this personal commitment, leaders influence others in order to maximize their efforts and achieve the goals.

You can read the story in Manager Mint in their e-edition here.on Pages 10-15