With the fast adoption rate of internet-connected smart phones, you would expect the number of people accessing news on mobile to rise substantially.  Well, it did.  In a Knight Foundation research study done by Nielsen, 89% of the U.S. adult mobile population access news on mobile devices. 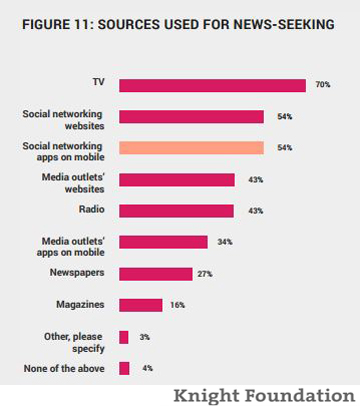 In fact, people access news on mobile devices more than any other medium… except television… when seeking out news.  Social networking websites and apps topped the list at 54% each, behind TV at 70%.  Media companies websites scored high on the list at 43% with radio also at 43%.

Media companies have invested a lot of time and money in apps, which shows mixed results.  About a third of the news seekers use apps for their news and information, but app users are more dedicated and “brand loyal” to a source, spending longer engagement times than mobile users.